How the evil System.Xml.Serialization.XmlSerializer class can bring down a server with 32Gb ram


This week I worked on some interesting stuff and fortunately there was a cool learning outcome from it, which is worth a blogpost, so I summarize it here.

This was an ASP.NET MVC application in a sector which begins with 'b' and ends with 'anking' (As you see I don't share confidential information about customers! ;) ). The application was running on a powerful server with 32GB ram, but the problem was that it ran out of memory after a few hours. I had a memory dump, which was already ~12Gb.

The first I thought was of course: Memory leak! So I opened WinDbg and started the investigation to prove this. First I concentrated on unmanaged stuff and used the !heap -s command to see the heaps. There was one with more than 8Gb, so I thought: ok, there must be something interesting there! I used the !heap -stat -h to see the distribution of the allocated objects. This showed something like this:

The distribution of the managed objects was also fine:

So I did not see this classical "hold a reference for a managed object forever" pattern. (Most people also call this managed memory leak, which in my opinion is a completely wrong term... some years ago I could yell at people using this, today I accept it... this is maybe a sign that I get older).

Ok, so next step: what else can that be? I thought... Ok, let's see what about appdomains. I used the !dumpdomain command.

The next step was to figure out what generates these assemblies. First I tried to use the !SaveModule command, but that does not work with dynamically generated assemblies. But google helped me:

There is a great StackOverflow answer here. In short:

Ok, so something with XML serialization! I asked other colleagues if they knew something about it, and I got a hot tip: this must be the evil XmlSerializer class. Here is a what msdn says:

"To increase performance, the XML serialization infrastructure dynamically generates assemblies to serialize and deserialize specified types. The infrastructure finds and reuses those assemblies. This behavior occurs only when using the following constructors:

If you use any of the other constructors, multiple versions of the same assembly are generated and never unloaded, which results in a memory leak and poor performance." *(I don't start now the discussion about the definition of a memory leak...)

Bamm, that's it! Since I already stored the assemblies of the application (not the dynamic assemblies... only the ones with framework+application code) I opened them immediately with ILSpy and looked for XmlSerializer. The application used everywhere one of the two mentioned constructor overload, except in one class. And that was the one causing the problem.

The fascinating part of the whole story for me was not that there are overloads of the XmlSerializer constructor which cause this terrible behavior (it's documented anyway), much rather the fact that you can find these kinds of things very easily with WinDbg.

Here is a simple application to simulate the problem:

Here is a screenshot from PerfMon which plots the Total Assemblies performance counter for the process. 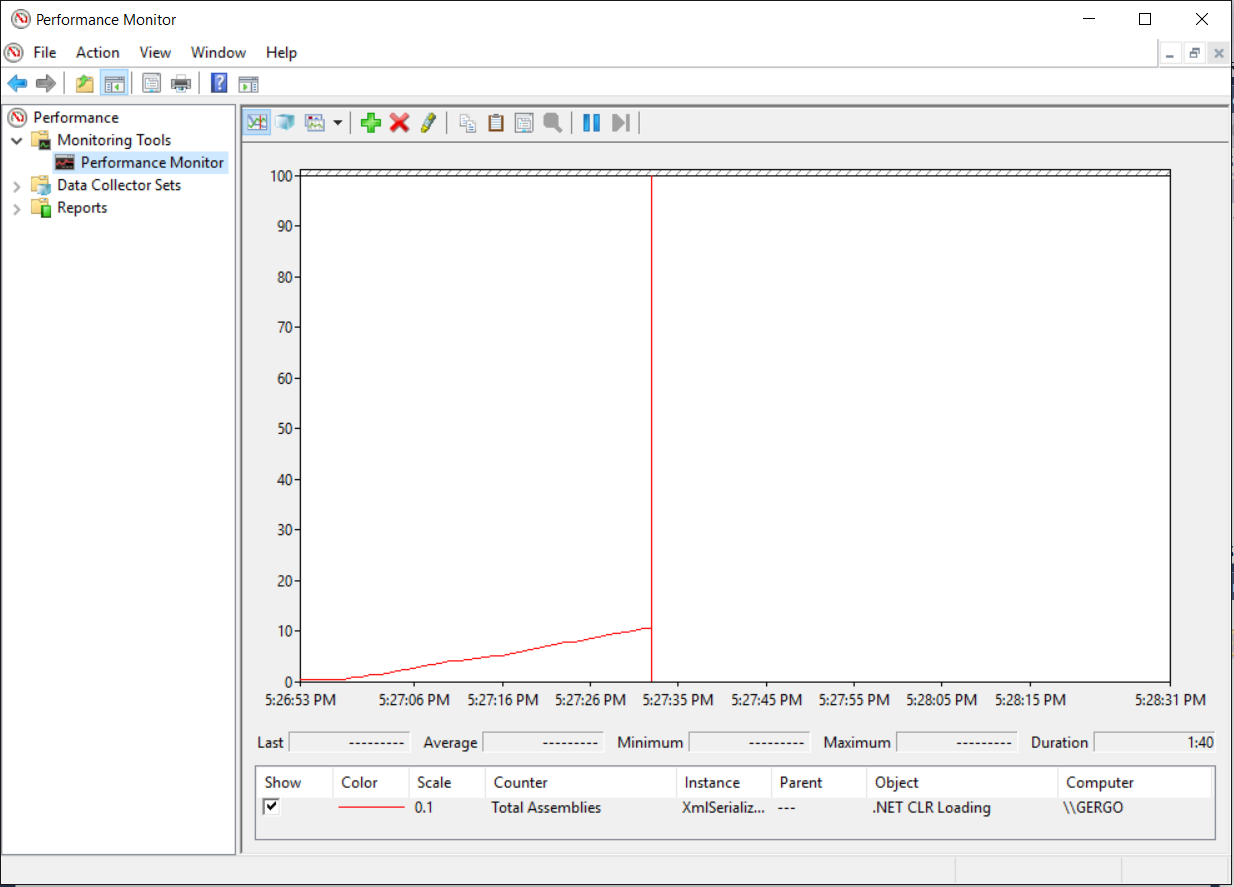 As you see the XmlSerializer creates an assembly in every round (in the production code it was for every incoming http request). As you know assemblies cannot be unloaded, only appdomains, but these assemblies are loaded into the main appdomain of the application, so they stick there until the process lives (which was a very short time range in production).