In this episode I talk about struct layout in C#. You will learn how C# structs are represented in memory and you will also learn how you can influence this with the StructLayoutAttribute.


The written form of the video:

Let’s start with the usual warning, when it comes to low level things:

Make sure you do not overuse or overthink this stuff. If you work on a typical business application then what we talk about here doesn’t really matter, since the potential performance benefit is negligible. On the other hand, if you have code with value types that are potentially accessed let’s say more than 1 million times a second, then this stuff can matter.

All right, let’s move on!

Not long ago, Sam tweeted this very interesting stuff regarding structs in C#.

I really wish I knew this earlier... pic.twitter.com/l0aaDxtRZM


We have two structs here, both of them contain 3-byte fields and 2 double fields.

And the interesting thing is that the size of the two structs is different: the first one is 40 bytes, the second one is only 24.

So, first obvious question: What is the reason for this?

In C# the compiler by default makes sure that the fields of value types are stored in the same order as they are defined in the C# code. Additionally, the fields of a type instance are aligned by using specific rules.

These rules can be found on MSDN.

So what by default happens is that the compiler makes sure that every field from structs is aligned according to the rules that we just discussed. Now when I say "by default" I mean that we create a struct without any additional attribute.

So, this one is the first struct:

The first field is a byte, which -well- is 1 byte big and it will be placed at position 0.

The second field is a double, which is 8 bytes. Now as we saw, by default the compiler makes sure that doubles are aligned at multiple of 8 -this is the second rule-, so in this case it places the second field to position 8. Between the end of the byte field and the beginning of the double field we have padding, so those bits aren’t used. Then we have the 3. field, which is 1 byte again, we place it to position 16, then we have a double, and here we need padding again, so we place it to position 24, and then we have our last byte field, which will start at position 32. Now structs must be aligned with the largest member type -remember, this was the first rule-, which is in this case the 8-byte big double type, and 32 + 8 is 40, and therefore the size of this struct is 40.

Now let’s do the same with the second struct!

With that we now understand that by default the fields in a C# struct are stored sequentially and we also know the rules on how the fields are aligned.

We saw that by changing the order of the fields we were able to get a smaller struct.


The next question is: why doesn’t the compiler automatically do this reordering for us?

The answer is that the developers of the C# compiler decided to use sequential layout for structs by default and it has a historical reason: in the early days of .NET it was assumed that structs will be commonly used when interoperating with unmanaged code, and for that to work, the fields must stay in order.

And by the way we can even see this if we look at the compiled code: 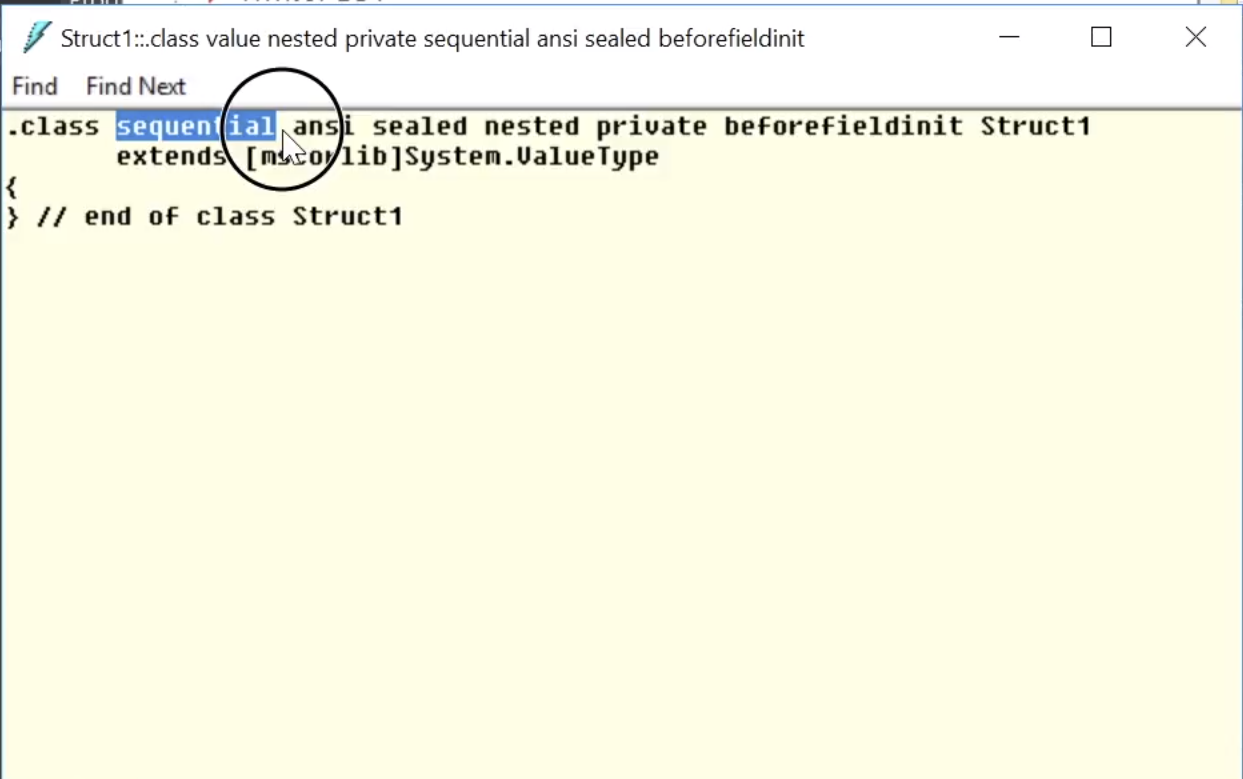 I simply opened the dll with our struct in ILDasm. We have "class sequential", a bunch of other things and then "extends System.ValueType" here. The important keyword for us here is "sequential", this means that the CLR makes sure that the fields aren’t reordered.

All right, next question:


If I know that my C# structs will only be used in managed code, can I change this behavior and let the compiler reorder the fields to minimize padding?

Yes! For that we can use the StructLayout attribute. It offers 3 options:

By setting StructLayout to LayoutKind.Auto we enable the compiler to reorder the fields.


So, we still have the alignment rules with padding, but as we saw in the original example there are cases where by reordering fields we can have less padding -or gaps- between our fields. Now with Auto layout you cannot pass this struct to unmanaged native code, on the other hand as long as you only use it in managed code you potentially save memory with auto layout without thinking about the order of your fields.

I compiled this code and I open it in ILDasm again. 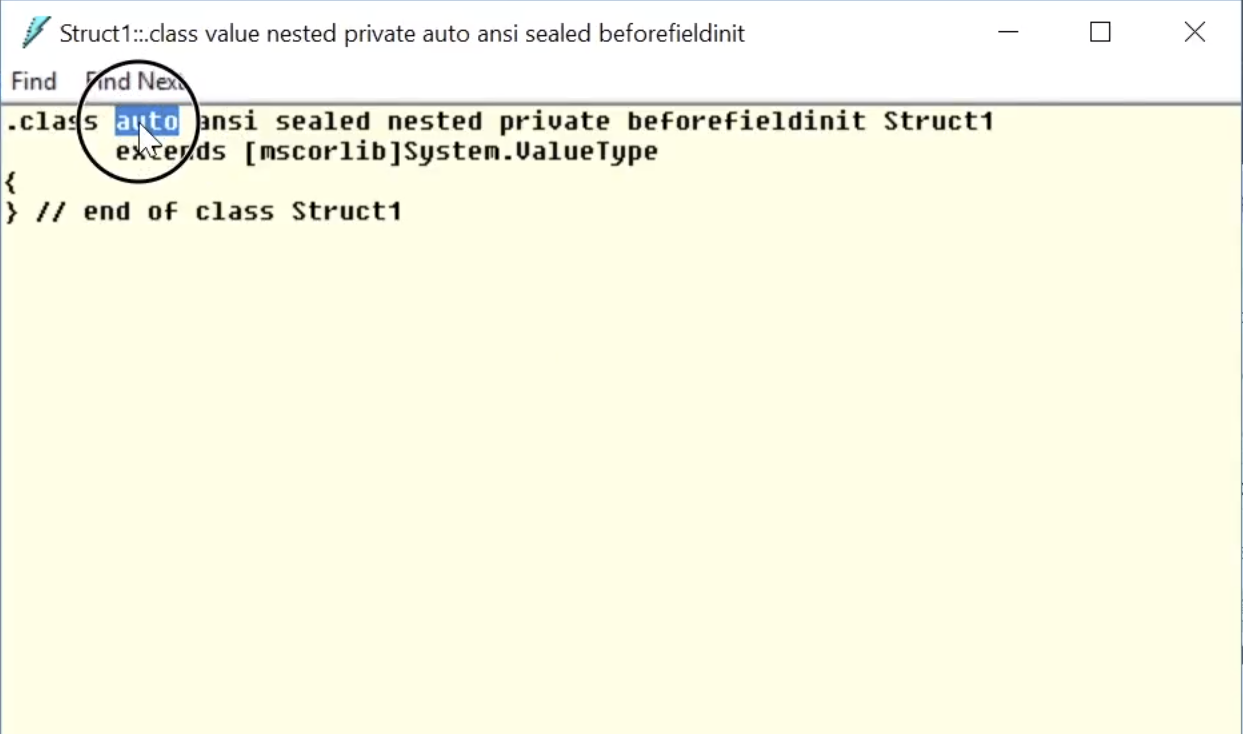 And as you can see this time we have ".class private auto" here instead of "sequential". So, this auto flag in the IL code tells the CLR to enable field reordering in this struct.

We also have a class here and as you can see this also has this auto flag: 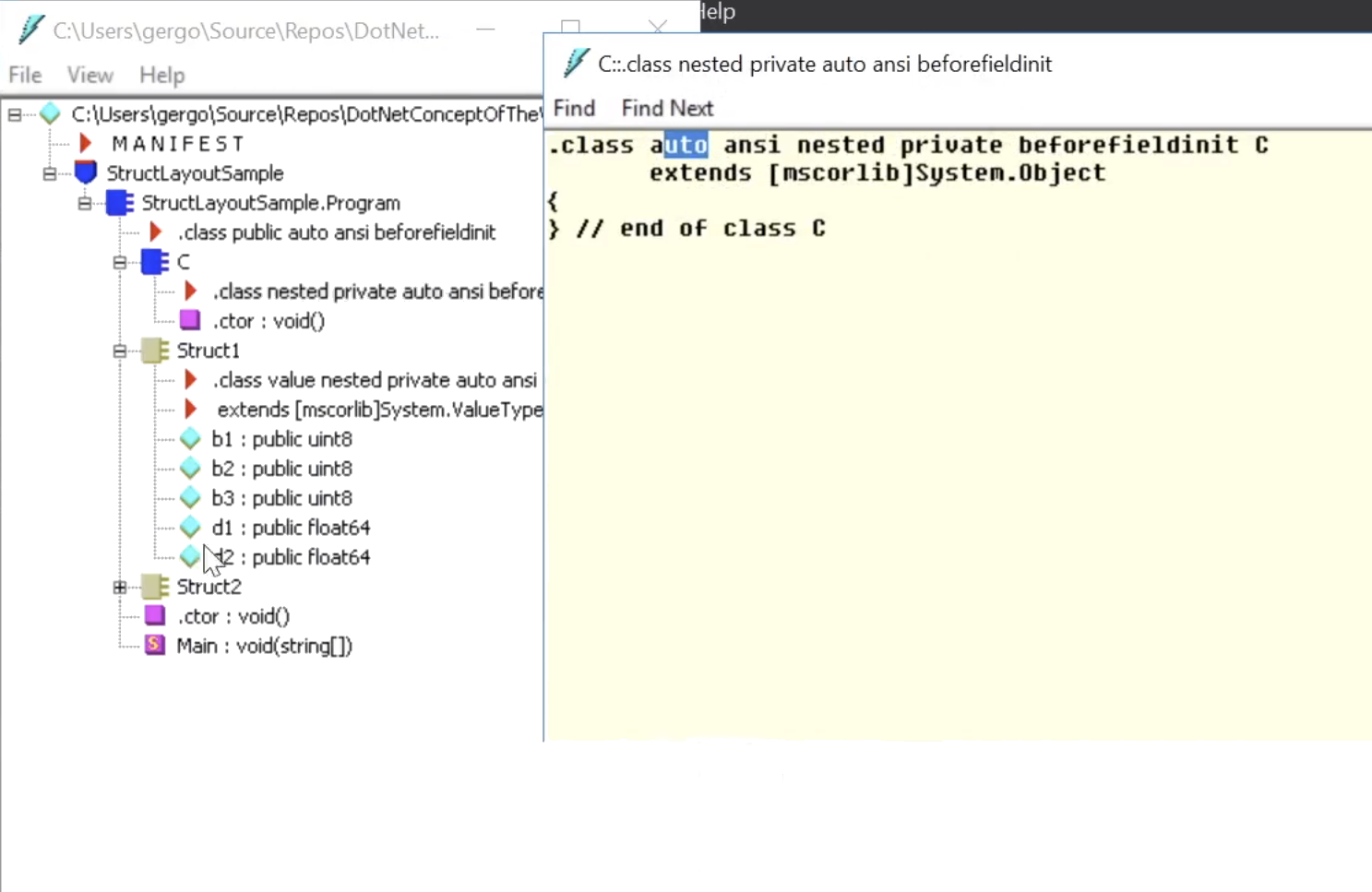 So, in the C# compiler the alignment default for classes is auto and for structs is sequential.

All right, now next question:


There was this packing size in the alignment rules, what is that?

On the StructLayoutAttribute you can define a packing size, here is how you can do it:


I have a 3. struct here with packsize 1 -it has the same fields as our previous structs-, the first item is a byte, it goes to position 0, and its size is 1. Then we have a double field, which is 8 byte, now remember the second rule, its aligned either to its size (which is 8) or to the pack size, whichever is smaller, in this case packsize is 1, so it’s aligned to 1 byte, therefore we put it to position 1, then we have a double again, same story, we put it to position 9, then we have two bytes, those are again aligned to 1 byte, so they go to position 17 and 18.

And as you can see, once I run this, it really says 19 (the first line is the size of our new struct with Pack=1): 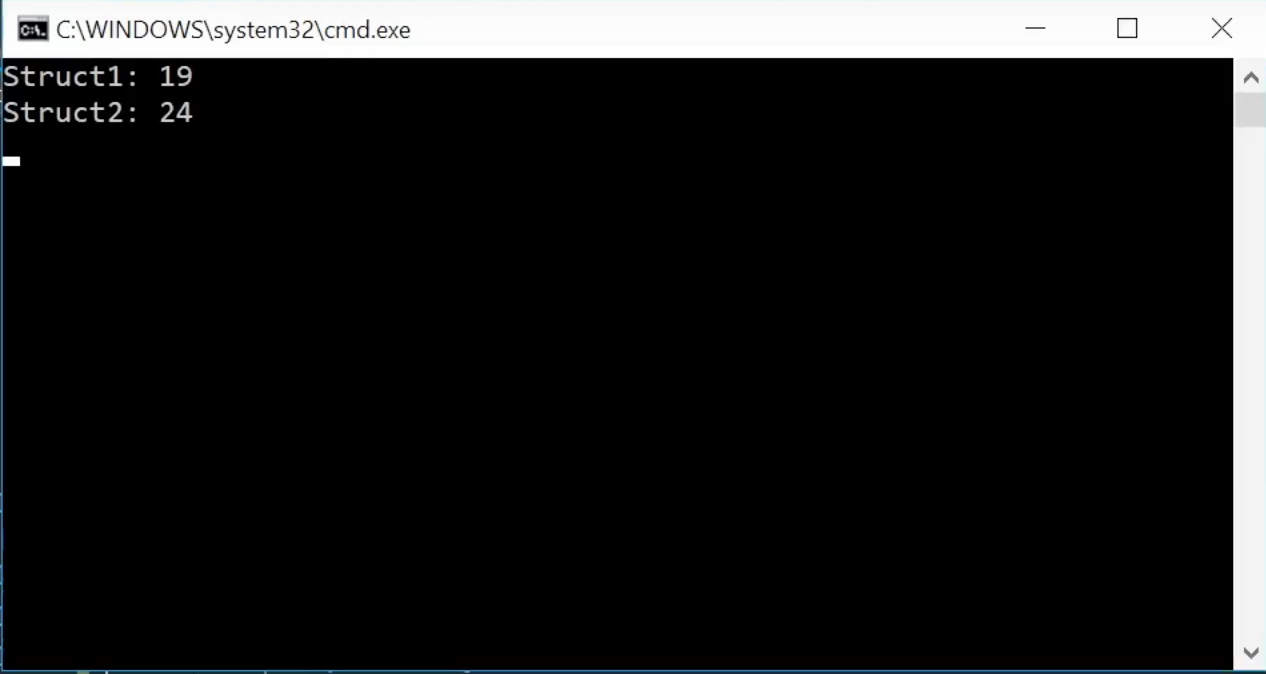 What can be the problem with this? And why isn’t 1 the default, since with that we can completely avoid padding?

Well, the problem with this is that CPUs need specific alignment to be able to access fields efficiently. If you set the pack size to for example 1 then you can end up with fields on a memory boundary that is very inefficient to access. So, before you change the packsize in production code I’d suggest measuring the difference first because you can easily end up with smaller structs and still slower runtime.

We talked about sequential and auto StuctLayout, the third option is explicit layout. If you set the StructLayout attribute to explicit layout then you can use the FieldOffset attributes to tell the CLR the offset of the fields within a struct.

This also came up in the twitter discussion, and one cool use case can be to implement a union with this.

So, we have 1 struct here with explicit layout. Now all 3 fields start at offset zero, so in this case this Union is either a byte, or an integer, or a Boolean, depending on how we use it.

Here is a little bit of sample code using it, so we can simply store an integer in it, and then use it, then we can interpret the integer as a Boolean, and so on:

The important thing is its size: as you can see it’s only 4 bytes, and that is because the integer is 4-byte.

With explicit layout we can create a struct with a size that is smaller than the sum of the size of its fields.


Sam's tween (that inspired this video/post)

Sample code: on GitHub
Full playlist with other episodes: on YouTube